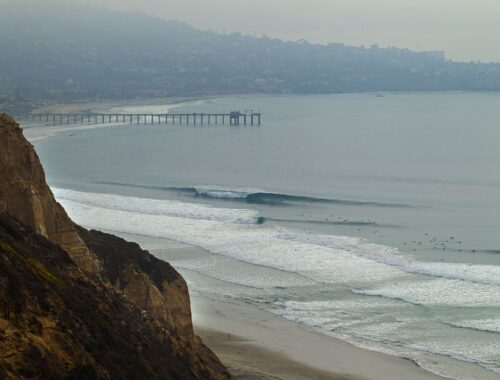 This is the best beachbreak in the county, and everyone knows it. The saving grace here is the long hike due to the sheer cliffs. It requires a time commitment that rules out most before-the-job or lunch-break sessions. There are three main peaks, shifting phantom peaks and sneaky insiders that work according to conditions. A deepwater canyon attracts most any swell with west in it and holds waves from 2 feet to as big as it gets. During head-high and smaller swells, low to medium tides are best, but, during large swells, it’s less tide sensitive. It should be obvious, by the glider port on the north end, that the dominant wind is onshore.

Black’s has long been a celebrated nudist beach, existing in spite of a 1976 city-wide vote banning nudity here and at other city beaches. In fact, the nudies may be able to claim a more entrenched, if not longer, residence at Black’s than surfers. But the obscene and surfing have come, over the years, to meld into the essential Black’s experience. In an attempt to reign in the freewheeling nudists, the city imposed a “nude line,” which is basically a line drawn in the sand and a couple of signs posted. The line is about 20 yards north of Black’s North Peak and prohibits nudity south of it. Squeamish surfers can now use the gated road off of La Jolla Farms Road, which ends up at the South Peak, and avoid the nudists altogether. From the bluff above, on a clear day, you can see Catalina Island.